With approximately one million American lives lost to Covid-19, the impact of the pandemic has been significant, often heartbreaking.

New data released today show just how significant the mental health impact of the pandemic has been—and for whom.

According to a new report from the COVID States Project, nearly half (49%) of respondents reported symptoms of depression, with 26% reporting moderate symptoms or worse, the level at which follow-up care would typically be recommended in a clinical setting.

This latest survey—conducted between March 2 and April 4, 2022 with more than 22,000 people across all 50 states and Washington, D.C—is part of a series of nationwide surveys about the public’s attitudes and behavior relating to Covid-19.

This survey, like others in the series, included a standard depression screening tool. The latest findings suggest substantially higher rates of moderate or severe depressive symptoms compared to the pre-pandemic rate of approximately 8%.

One silver lining: Prior waves of the survey showed even higher rates of depression, peaking in December 2020.

Not only are the overall rates of depression concerning, but some of the demographic differences are stark.

Rates of depression varied dramatically by age. Fully half of young adults aged 18 to 24 reported moderate or severe symptoms of depression and another 23% reported mild symptoms. In contrast, 22% of middle-aged people between 45 and 64 had moderate or higher depressive symptoms and 9% of people 65 and older fell into this category. Before the pandemic, researchers note, levels of depression tended to be consistent across age groups.

“These are scary high numbers, and it’s not surprising that mental health services are overwhelmed,” said Katherine Ognyanova, PhD, associate professor at the Rutgers University School of Communication and Information and one of the study’s authors. “Teaching in college, we get to see first-hand how many of our students are struggling and how difficult it can be for them to find help. There are very long wait times for counseling and psychiatric services at universities. As instructors, we encounter an unusually high number of students facing challenges that we are not fully equipped to help them tackle.”

Regional differences were also evident. Minnesota and Connecticut had the lowest rates of depression at 20% while Alabama, Arkansas, Oklahoma, Kentucky, and New Mexico had the highest at 32%.

How you feel reflects how you vote

“We had anticipated that this might reverse with the change in administration from Trump to Biden. But it really did not move by much,” said Matthew A. Baum, Marvin Kalb Professor of Global Communications and professor of public policy at Harvard University and the John F. Kennedy School of Government and another of the study’s authors.

Baum explained that Democrats have been more concerned about the pandemic than Republicans and more likely to isolate, social distance, and mask.

“All of these measures are, of course, challenging on many levels and presumably could be associated with more depression,” he said. “Additionally, Democrats express greater alarm over the state of U.S. political institutions, which represents another source of stress.”

In young people, the gap between Democrats and Republicans is 14% compared with just 2% to 4% among older adults.

“I think that while social isolation is difficult for everyone, it is especially difficult for young people and took place at a time when one of the primary vehicles for delivering mental health care—colleges and universities—became unavailable,” Baum said. “It would be unsurprising to discover that the generational and political factors interact, such that young Democrats are most likely to become depressed.”

Independents generally tracked with Democrats through March 2021 but since then, Independents have become the group most likely to report depression. In the current survey, approximately one-third of Independents report moderate or severe symptoms compared to 26% of Democrats and 20% of Republicans.

This phenomenon is harder to explain, according to Baum. He suggests that because Independents tend to be less ideological or politically engaged, they may be particularly sensitive to economic stresses, such as inflation. In turn, that could factor into higher rates of depression.

Not literally everyone—but it is increasingly common for Americans to report knowing someone who has died of Covid-19.

According to the new data, 40% of Americans know at least one person who has died of Covid-19. Nearly one in ten (7%) know three or more people who have died.

These deaths hit close to home for many. Of respondents who know at least one person who died from Covid-19, 15% lost a family member and 18% lost a friend.

Black and Hispanic respondents, as well as people living in the South, were more likely than others to report knowing someone who died of Covid-19. Regional differences generally reflect the per capita death rates in those states, according to the report.

Though just knowing someone who died did not appear to affect rates of depression, losing a loved one did. Among the people who lost a family member, nearly one-third reported depression compared to 26% of people who didn’t know anyone who died.

“Every time we put out a mental health report, I’m once again surprised to see how bad things look,” Ognyanova said. “It will likely take quite some time before we are able to assess the long-term consequences, or see if the numbers may bounce back to pre-pandemic times.”

The author is married to one of the researchers who produced this report.

Full coverage and live updates on the Coronavirus

Tue May 3 , 2022
Newswise — The lack of consensus or accepted definition for light sedation presents challenges to critical care practitioners seeking to follow guidelines related to pain, agitation and delirium. Comfort and sedation are central components of patient care in an intensive care unit (ICU), and the most recent guidelines recommend avoiding […] 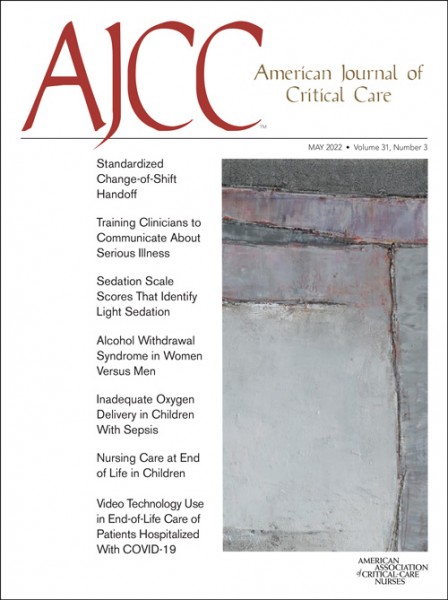