We propose that reimagining the definition of justice in clinical triage protocols begins at the roots of these efforts, with the fundamental ethical and moral values that underpin them. Our goal is to address certain current decision-making frameworks which fail to take considerations of justice and equity seriously.

In the context of the COVID-19 pandemic, there have been several emerging suggestions about how we can best allocate limited resources [22]. It is critical, however, that these principles incorporate a defensible conception of justice which serves marginalized patients. Justice in triage is deceivingly complicated, and a model that privileges overall utility while systematically and disproportionately harming certain people is contestable. The disability critique, which reveals the shortcomings of traditional utilitarian undercurrents in clinical decision-making, invites a discussion of conceptualizations of justice which propose a richer notion of rights and freedoms, including but not limited to egalitarianism, fair equality of opportunity, and capabilities theory. In addition, the importance of procedural justice cannot be underestimated in the creation of triage guidelines.

The prioritarian model recognizes principles beyond utility (such as proportionality or reciprocity) and traditionally “non-clinical” features of patients including personal and social circumstance, as contributing to clinical state, giving “greater weight to those who are worse off” [23]. This approach is founded on the underlying assumption that stratifying individuals according to properties that are a function of a natural or social lottery (e.g., ability, ethnicity, gender, family upbringing) is unjust discrimination. The prioritarian model highlights the implicit bias in triage protocols criticized for explicitly excluding individuals with advanced neurocognitive disorders and unfairly assessing long-term survival of individuals with disabilities [3, 4]. Beyond defending against discrimination, egalitarian justice also argues for positive benefits for the disadvantaged. The fair equality of opportunity principle stipulates that individuals deprived of certain abilities should receive benefits that would “ameliorate the unfortunate effects of life’s lottery” [15]. In other words, fair equality of opportunity permits inequalities in the distribution of resources only if those inequalities benefit the worst off. There is an important point here to clarify: while those without disabilities tend to view individuals with disabilities as ‘worse off’ and assume the association of disabling traits with a lower quality of life, disability advocates would argue otherwise, stressing that disabled people experience disadvantage precisely because of this type of biased view. While biomedical references are useful in assessing quality of life, inequities may arise from the very application of these ableist paradigms to those with disabilities. Social models of disability variously argue that social contexts create disadvantages and that physical differences are not the sole root of attitudinal barriers [24]. The WHO definition of disability states that “disability is a part of being human”, and in doing so captures the inter-relationship between a different body or health state and personal or environmental factors such as inaccessible infrastructure and/or social stigma [25]. A given impairment is thus not a stable entity, and will manifest differently depending on the individual and their contextual environment. This includes the environment of the clinic, and the ways in which an individual’s differences interact with the health system structures and the cultures of clinicians. Disability philosopher Joel Michael Reynolds argues:

What many people with disabilities do report as diminishing quality of life is often less the direct effect of their physical or psychological impairments than the effects of living in a society that is designed for and supportive of able-bodied people alone [20]. Using an approach of equality of opportunity, healthcare can be argued to have a positive obligation to correct for undeserved disadvantages imposed by society on individuals with disabilities, even if doing so creates inequalities in resource allocation. Presently, disabled people (like other marginalized groups) attain lower rates of education, employment, housing, and income than their able-bodied counterparts [27, 28]. As they currently stand, many triage protocols reiterate and reify this disparity. Just as we use quotas and forms of affirmative action to counteract prejudicial practices toward racialized and gendered persons, fair equality of opportunity demands that we apportion medical care in a manner that is devoid of discrimination and ableism. Just as we cannot ethically countenance removing health care resources from racialized minorities because they have suffered higher rates of morbidity and mortality than other populations with COVID-19 [27], we ought not do so for disabled people on the basis of assumptions that they will fare poorly when infected.

Capabilities theory recognizes that justice requires the fulfillment of central human capabilities which are conducive to a flourishing life lived with dignity. These capabilities include: life, bodily health, bodily integrity, senses, imagination, and thought; emotions; practical reason; affiliation; interactions with other species; play; and control over one’s environment [29]. Martha Nussbaum, a pioneer of the theory, argues that all capabilities are requisite to a life worthy of human dignity, and that it is the duty of society to provision the means necessary for its participants to satisfy these capabilities.

Applying the capabilities approach to the realm of disability, it is apparent that physical- or neuro-diversity does not diminish most of this list but rather highlights the importance of considering each feature in an inclusive manner. Studies demonstrate the extreme adaptivity of our species: for example, even individuals who experience quadriplegia as the result of spinal cord injury report experiencing a similar level of happiness as prior to their injury (it should be noted, with a lived experience which may be vastly different than perceived by able-bodied persons, even by the individual involved prior to their injury) [30]. A congenitally disabled person may have an even firmer sense of bodily integrity and personal satisfaction, given their own existence is all that they have experience of. Individuals living with disability variously experience the planet, their emotions, reason, attachments, play, and ambition—the human experience—in a manner that is of equivalent importance to the experiences of others around them.

Grounding bioethical triage principles in the focus of traditional liberal theory on reason and independence means that we rely on an impoverished vision of the human being. By employing capabilities theory in triage, we adopt a richer conception of ourselves that enables fulsome understanding of how we might allocate resources in a manner in keeping with fairness across our whole human community. Applied to the pandemic context, the capabilities approach articulates a conception of justice requiring not only the absence of negative hindrances that obstruct an individual’s ability to satisfy these capabilities, but also the provision of positive freedoms in support of flourishing [15]. In many ways, the focus of the capabilities approach is similar to that of an international human rights framework—in fact, this framework has been adopted by many international organizations [29, 31, 32]. Nussbaum writes:

In some form, [all ten capabilities] are held to be part of a minimum account of social justice: a society that does not guarantee these to all citizens, at some appropriate threshold level, falls short of being a fully just society, whatever its level of opulence [29].

The capabilities approach and disability rights critique of clinical triage protocols highlight the need for a richer conceptualization of our frameworks for selfhood, justice, and freedom. The purpose of adopting a capabilities approach is not to create a “checklist” of qualities required to be human, but rather to challenge the traditional Enlightenment dogma of justice, and expand our focus beyond the negative freedoms (rights) often inscribed in procedural frameworks, toward positive freedoms conducive to the achievement of meaningful life goals and experience. Though seemingly idealistic, the latter calls into question notions of human rights and public duties to provide a more nuanced idea of what justice entails.

In addition to adopting richer notions of justice, we must also consider the issue of fairness in the process of protocol development itself. Individuals with disabilities (particularly severe mental, physical, and cognitive impairments) have historically been excluded from participation in the protocol development process, and in choosing the principles that inform them [33]. We argue that the exclusion of people with disabilities from policy discussions surrounding resource allocation has contributed to the inadequate consideration of their interests. The first wave of the current pandemic disproportionately impacted people with pre- existing morbidities, chronic illness, and disabilities [34,35,36], despite more cautious behaviour on the part of these individuals due to expected vulnerability to illness [37]. In North America, a majority of deaths have occurred in long-term care facilities [38]. Given that physical and mental dysfunction increase with age, and both the elderly and those with disabilities more often live in congregate settings, the disproportionate rates of infection, morbidity, and mortality in these groups did not result solely from increased medical frailty, but as much from policies which encouraged the seeding of the virus in these vulnerable communities via decisions limiting personal protective equipment and admissions to acute care [39,40,41].

Given mounting criticism, several groups have recommended that protocols be developed and revised in collaboration with individuals with disabilities and their representatives, ensuring an ethical and just procedure through which guidelines are created and distributed [4,5,6]. Some have proposed a need to consult with human rights experts and marginalized communities who have been disproportionately impacted by COVID-19 [5], also highlighting the need for greater transparency and openness in the distribution of these clinical guidelines.

The importance of procedural ethics in pandemic planning had been articulated previously. In the aftermath of the SARS-CoV-1 outbreak, stakeholder engagement and timely public debate were identified as necessary for any ethical framework to be “relevant and legitimate” [42]. Despite this historical lesson, triage protocols continue to be developed in relative secrecy. The draft Ontario protocol, for example, only entered into public knowledge following its coverage in a news article, despite having already become active to quietly inform clinical practice [43]. While we recognize that public circulation makes these protocols vulnerable to scrutiny, procedural justice requires that triage decisions are made transparently, with input from the diverse members of society who will be affected by them.

The demands of procedural justice may require that triage decisions be further removed from the bias of the clinical context and vested instead in robust and equitable guidelines. The mantra of the disability movement, “nothing about us without us,” arose from beliefs and practices in the medical community that presumed that disabled persons requiring care provision could not autonomously direct their own lives—as if the propensity to self-determination should be based solely on one’s ability to perform activities of daily living. Indeed, social and health institutions play crucial roles in the lives of persons with disabilities, and because the vast majority of clinicians are able-bodied, it is absolutely critical that disabled people be included in the discussion about what is a fair allocation of limited clinical resources. Rather than holding their interests and needs at arm’s length, fairness of opportunity requires that disabled persons be expressly present and heard at the table. This can be a potential remedy to their ongoing disadvantage, bringing greater equity to the triage process and protecting physicians from bearing the burden of agency at the point of care [33].

Thu Feb 17 , 2022
Computer-assisted cognitive behavioral therapy improved depression symptoms in primary care patients compared with just treatment as usual, according to a study published in JAMA Network Open.  One study author reported having equity interest in, and consulting with, the company that distributed the computer program used in the research. The study […] 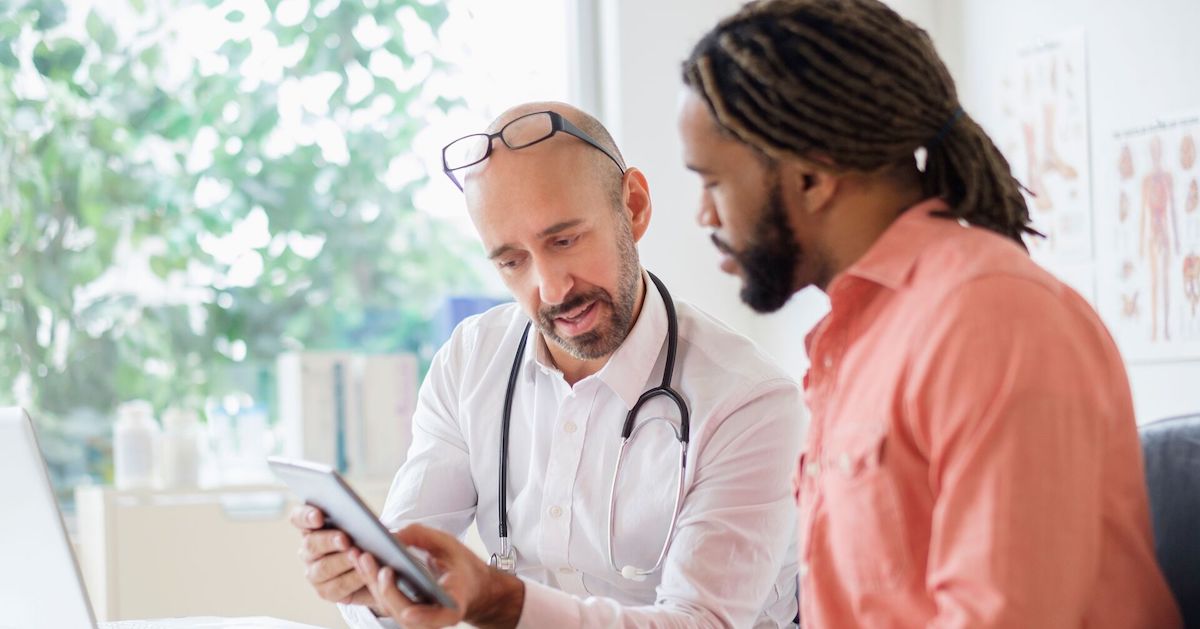