A new group of digital nursing leaders wants to make sure the voice of nurses is heard when decisions are made about technology in health and social care.

Ensuring the nursing workforce is digitally literate, while boosting the number of nurses specialising in the field of digital technology, is among the priorities for the recently created network of chief nursing information officers (CNIOs).

“If you don’t get the nurses on board, you don’t have them driving forward the adoption [of digital technology] for everybody else”

Without the appropriate staff and skills in place to keep pace with the rapidly growing digital agenda, they warn there is a risk that technology will not be used “properly or as intended”, and that patient care could suffer as a result.

The CNIO Network Advisory Panel, whose members were elected for a two-year period in July 2021, aims to become the leading source of advice and information for nurses on digital technology, while representing and raising the profile of the profession in the area. Three members of the panel have spoken exclusively to Nursing Times about their priorities, challenges and hopes for the future as demand in this area continues to snowball.

They said it was their role to provide their clinical nursing viewpoint and experience on what digital tools were needed in their trusts, to help teams embed these in practice and to ensure nurse colleagues were enabled to use them.

Collectively, they hoped the panel would become the “go-to people” for advice on digital technology in nursing, while collaborating with other professions to further expand the digital agenda in health and care.

Boosting the use of technology was a core part of The NHS Long Term Plan for England, published in 2019, which pledged that “digitally enabled care will go mainstream”, while ensuring health professionals had the digital tools needed to do so. Since then, the panel noted the digital agenda had grown “exponentially”, especially during the coronavirus pandemic, which had sparked a shift to remote monitoring and consultations.

Ms Rogers, who will join Barking, Havering and Redbridge University Hospitals NHS Trust as its new CNIO and deputy chief nurse in mid-March, stressed the importance of the nursing workforce in helping to drive the digital agenda.

She said tens of thousands more digital nurses were needed to join the field in the next five years, to complement existing numbers, and that digital demand had “snowballed” and was “coming faster than we can keep up [with] at the moment”.

As well as the appropriate funding required to source and implement good technologies in services, it was also important to invest in the workforce, she said.

“To get the best out of these systems and realise all the benefits, people like us are absolutely critical,” Ms Rogers told Nursing Times.

“Technology is seen as one of the things that will really sustain healthcare and the NHS. But we can’t just throw money at it.

As part of her work with the panel, she said a priority was around implementing more mentoring for new and prospective digital nurses. Alongside panel members, she was in the process of setting out what this might look like. “Whether it is just advice and guidance, or a full mentoring package, I think that is something we are signed up to,” she said.

It was important that nurses were aware of the career pathways available in the digital sphere and were supported appropriately when they took on such a role. She said: “We want to grow the nursing informatics field, we want to ensure young nurses come into the field, or indeed [if they] have an interest in digital, have some support.”

She described it as currently being “quite lonely” when nurses first go into digital roles, such as becoming a CNIO, and there was a “need to grow support”.

Ms Grafton, who has a background in critical care nursing, reiterated that it was crucial nurses were digitally aware and appropriately trained to make sure technologies were best utilised. If not, she warned “you risk spending a lot of money on technology and it not being used properly or as intended, or you risk making care less efficient or [the] patient experience poorer”.

She suggested nurses who were not so skilled digitally but were happy in their jobs risked feeling “alienated” if they were forced to use digital systems and tools. Services, therefore, must have a digitally literate workforce that is supported to “attain the required skills”, she noted.

“Empowering our nursing workforce” in the digital field “will, in turn, allow them to support their patients”, she told Nursing Times. 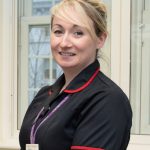 Ms Grafton stressed the importance of getting nurses –  the largest workforce across the health service – to engage with new technology. “If you don’t get the nurses on board, you don’t have them driving forward the adoption [of digital technology] for everybody else,” she noted.

The panel members also said that they thought undergraduate nurse education currently lacked enough focus on digital skills training and competency assessments, and that they were calling for this to change.

However, one of the biggest challenges, according to Ms Grafton, was the “variability” in the use of technologies across the health service. For example, she noted that some staff have had electronic patient records “for many years”, while others were “still very much on paper”. She stated that this “needs to change as well”, highlighting that it came down to funding and investment.

Last month, health and social care secretary Sajid Javid announced that a first-of-its-kind digital health plan would be published this spring. As part of the government’s ambitions for this agenda, he said he wanted to see 90% of NHS trusts with electronic patient records in place, or to be processing them, by December 2023.

Another priority for the panel was around stamping out the “variation” around the CNIO role itself. It said not every trust had a CNIO in post and some were at high-level pay bands while others were at a relatively low level. The team planned to support the national CNIO, Natasha Phillips, with work on the development and implementation of “a standard” for the CNIO post at trust level.

The panel members also wanted to help create a career pathway for those aspiring to become a CNIO. They felt that, currently, digital nurses almost fell into the role and that identifying experience requirements, for example, would help to guide more nurses into the post.

The panel forms part of several networks under the online media platform Digital Health, including medical and operational panels, and also has representatives from allied health professionals. While covering both health and social care, its weighting is mainly NHS acute care, and focuses largely on England. There is hope of broadening its international reach in the months to come.

As well as staff, the panel said it was important for it to consider the impact of the increasing use of technologies in health and care on patients who were not so digitally savvy or who were unable to access remote appointments, for example. 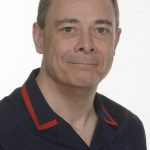 Efforts should also be made to ensure the push for digital did not widen health inequalities and that technologies were built with accessibility in mind, such as for patients with neurodiversity, they said.

Mr Noel, who has a background in critical care, added it was part of their role on the panel to speak up and advocate for the workforce and for patients.

It was about making sure that patients’ concerns and voices were “heard in the mix” when it came to understanding how well a digital innovation was working, he said. He cited the example of an older relative who was struggling to manage the digital appointment process. “It is [about] understanding what those disparities are like,” he said.

When asked what the panel would like to achieve during its two-year reign, the CNIOs said they wanted to enhance their social media presence and improve their connectedness with the nursing workforce.

Mr Noel said he hoped the network would “keep raising the profile of nursing in digital and keep on making our voices heard and keep on engaging with the policy makers and the senior clinicians… to make sure that we have a voice in what we are doing”. 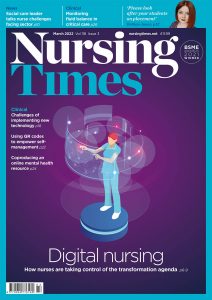 This story is featured in the March 2022 Nursing Times print magazine, which is focused on digital nursing. Read more content from the issue:

Stop Ego Lifting in the Gym for More Productive Workouts

Thu Mar 3 , 2022
You know you’re in for a long workout when the guy next to you grabs the biggest dumbbells on the rack and proceeds to throw them around with no regard for form, tempo, or even whether he’s still going to have working joints in ten years. He’s looking around for […]