Boston Globe tech reporters tell the story of the region’s technology and innovation industry, highlighting key players, trends, and why they matter.

Tung said that between several hundred thousand and 1.5 million people may have the condition in the United States at one time. Massachusetts representative Ayanna Pressley and actress Jada Pinkett Smith are among the prominent people with alopecia.

Concert tested its twice-daily pill, dubbed CTP-543, in a study of about 700 people with moderate or severe alopecia areata. To be eligible for the study, volunteers had to have lost at least half of their head hair. The final group of volunteers had, on average, less than 16 percent of their hair left, and more than half of them were bald.

“This is super exciting,” said Dr. Lynne J. Goldberg, director of the hair clinic at Boston Medical Center and professor of dermatology at Boston University School of Medicine. Goldberg, who was not involved in the trial, said that even partially restoring hair could make a huge difference for people with the condition. She is also optimistic that taking the drug for longer than 24 weeks could help even more people. “I don’t think 40 percent will be the full number. Some people will take longer to respond.”

Alopecia areata is caused when T cells — the soldiers of the immune system — invade and mistakenly attack hair follicles. Tung said that Concert’s drug likely works by preventing the T cells from continuing to infiltrate the follicles. He does not expect the drug to work for those with more common forms of age-related hair loss.

The new results came from the first of Concert’s two Phase 3 trials investigating the drug. The company expects to present data from the second study in the third quarter of this year. If those results are also positive, Concert will be poised to submit the drug to the US Food and Drug Administration for approval in 2023.

The pharmaceutical giant Eli Lilly and Company could beat Concert to the finish line. Earlier this year, Lilly reported its own positive results from two Phase 3 studies of baricitinib — approved for the treatment of rheumatoid arthritis — as a potential therapy for alopecia areata. After 36 weeks of treatment, Lilly’s drug showed similar results to what the Concert drug achieved at 24 weeks. Nearly 39 percent of people who got the high dose of baricitinib regrew hair on 80 percent of their head. Pfizer’s tofacitinib and Incyte’s cream-based ruxolitinib have also been tested for the condition.

Tung isn’t worried about the competition. “Honestly, I think there are enough patients in the US who are going to need treatment for alopecia areata that there will be multiple successful drugs,” he said.

Dr. Brett King, associate professor of dermatology at Yale School of Medicine, who was a clinical investigator for Concert’s and Lilly’s trials, was encouraged that the two companies showed relatively consistent results. “With every single one of these advancements, we have support that this works,” he said. “We are stepping closer and closer to FDA approval, of not just one medicine, but multiple.”

Having multiple JAK inhibitors approved for alopecia areata would be good for patients, King said, because if they don’t respond to one treatment, there is a chance that they may respond to a different one.

If multiple therapies become approved, doctors will likely compare the safety profiles of the drugs when deciding which one to prescribe. The therapies all belong to a class of drugs known as JAK inhibitors, which have come under fire for potentially dangerous side effects. Lilly’s baricitinib, for instance, carries warnings for increased risk of infections, increased chance of cardiovascular conditions, and higher rates of lymphoma and lung cancer.

Tung said that his firm is “pretty pleased” with its drug’s safety and tolerability. Concert reported higher rates of acne and headaches, two cases of shingles, and five serious adverse events in people who received the pills. The company didn’t disclose details on those adverse events. But it did say that there were no cases of pulmonary embolisms or deep vein thromboses, serious side effects associated with high doses of baricitinib.

Concert’s trial results were welcome news for the company, whose stock was down nearly 84 percent since its peak in early 2018 following a series of clinical and legal setbacks. The stock rose about 13 percent during the day Monday before dropping and closing down 9 percent.

Tue May 31 , 2022
Source/Disclosures Published by: Disclosures: Dal reports receiving unrestricted research grants and lecture fees from Ipsen and Pfizer. Please see the study for all other authors’ relevant financial disclosures. ADD TOPIC TO EMAIL ALERTS Receive an email when new articles are posted on […] 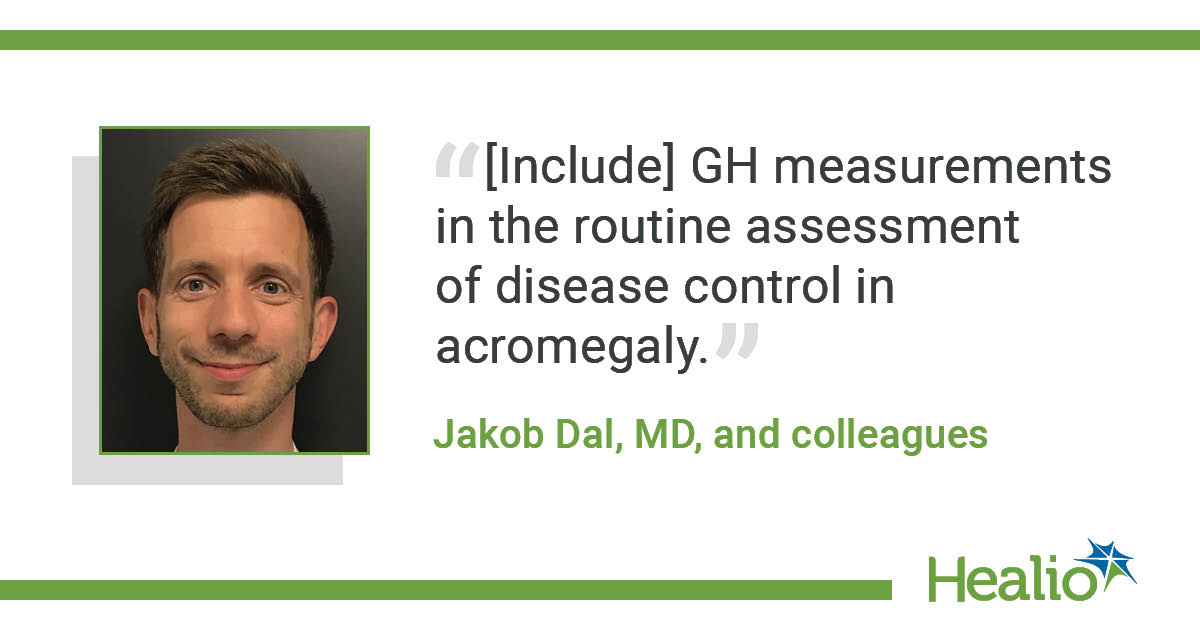