Although hot flashes are the quintessential symptom, there are several other menopause-related symptoms, such as brain fog or memory trouble, that women may not realize are connected to their changing hormones.

A new study published January 12 in the journal Menopause found a link between menopausal symptoms, especially depression and sexual dysfunction, and cognitive performance in areas such as memory, attention, and language skills.

“Often women don’t recognize these symptoms as part of menopause,” says Margaret Nachtigall, MD, a gynecologist at NYU Langone Health and a clinical assistant professor at the NYU School of Medicine, both in New York City. “Because cognitive issues can develop slowly, they might not see it as related to a loss of estrogen,” she says.

2 out of 3 Women Report Cognitive Trouble During Menopause Transition

According to the Office on Women’s Health, part of the Department of Health and Human Services, up to two-thirds of women in perimenopause report cognitive problems.

“In the women that I see in clinic, that can manifest as difficulty remembering, the inability to find the right word for what they are trying to say, putting dishes in the cabinet instead of the dishwasher, not remembering everything on their list that they wanted at the store, or being in a meeting and forgetting what they were going to say,” says Dr. Nachtigall.

RELATED: Predicting How Long the Menopausal Transition Will Last, and When You’ll Reach Menopause: 10 Questions and Answers

Study Included Women at Different Stages of the Menopause Transition

To examine whether the cognitive performance of women is related to the severity of menopausal symptoms, investigators looked at 404 women in a rural area in north India. The subjects were between ages 40 and 65 and were not using hormone therapy (HT).

The women were divided in four groups so that researchers could look at the frequency and severity of different symptoms according to the stage in the menopause transition.

Investigators found that the kind of menopausal symptoms the women experienced were different depending on their life stage.

Researchers found that the cognitive performance of the women was linked to the severity of certain menopause symptoms, especially depression and sexual dysfunction.

Sexual dysfunction can manifest in different ways during menopause and people are often reluctant to talk about it, says Nachtigall. “Some women feel as though they have vaginal dryness, itchiness, or a feeling like sandpaper in the vagina,” she says.

A decrease in arousal or in sexual response and pleasure are also symptoms of sexual dysfunction, according to the North American Menopause Society.

The authors found no association between the severity of vasomotor symptoms and cognitive performance, although other studies have suggested that such an association exists.

Lack of Estrogen Can Cause Many Different Symptoms

In menopause, the ovaries aren’t producing any estrogen, notes Nachtigall. “We have estrogen receptors almost everywhere — brain, eyes, teeth, bones — and so it’s not surprising that when we have a lack of estrogen that all these different symptoms can occur. It makes sense that a person with more menopause symptoms and more severe symptoms would also have a lower cognitive function, but interesting that they were able to show that in this study,” she says.

These findings reflect what Nachtigall sees in her own practice. “Often, people who have more hot flashes, more depression, and more symptoms of menopause in general are also the same people who experience difficulties with cognitive functioning.”

This study provides further support that women should seek care when you are going through menopause or perimenopause, says Nachtigall. “When you see a provider, talk about the symptoms you are experiencing, even if you don’t think they are related to menopause,” she says.

This can lead to an important discussion around different treatment options, including whether or not hormone therapy (HT) may help with your symptoms, says Nachtigall. “It’s been shown in multiple studies that estrogen does improve symptoms of cognitive functioning. It’s also been shown in many studies that estrogen will reverse hot flashes, will improve mood, will improve sexual functioning and vaginal dryness, and therefore may be a good option for many people,” she says.

Research published in Menopause in December 2019 found that there could be a cognitive benefit later in life for some women who had more exposure to estrogen, both through a longer reproductive window and the use of longer-term HT.

The risks and benefits of hormone therapy should be discussed with your doctor, as it is not appropriate for everyone, including women who have unexplained bleeding, estrogen receptor positive cancer or severe liver disease or a serious clotting disorder, says Nachtigall.

The findings of this study point to the fact that not all symptoms related to the menopause transition are hot flashes; there are other symptoms, says Stephanie S. Faubion, MD, the director of the Center for Women’s Health at the Mayo Clinic in Rochester, Minnesota, and the medical director of the North American Menopause Society (NAMS).

“Included in that are these cognitive type changes that women commonly describe, as well as mood issues that need to be addressed,” says Dr. Faubion. That doesn’t mean that all these symptoms can be treated with hormone therapy — there could be other issues or conditions contributing to these symptoms that need to be addressed and evaluated, she adds.

RELATED: What Experts Want Women of Color to Know About Menopause

“It’s important to note that we don’t know if giving hormone therapy during menopause helps with memory, short or long term. But we do know if you’re going to take hormone therapy for other menopause symptoms — hot flashes, night sweats — it does tend to help with mood,” she says. The relationship between depression and memory issues is well-established, adds Faubion.

Insomnia, Other Sleep Symptoms, Can Be an Early Sign of Lack of Estrogen

If not through hormone therapy, is there a way to treat “brain fog” or memory issues? “Solutions to memory issues might be related to sleep issues or an underlying sleep disorder. It may also be improved by managing stress or treating any underlying mood disorders, such as anxiety or depression,” says Faubion.

Nachtigall echoes that sleep is an important issue and often a problem for women during the menopause transition. “Many people that I see complain of insomnia, and that’s one of the early signs of lack of estrogen that patients in menopause will experience,” she says.

Wed Jan 19 , 2022
New Brunswick has moved to urgently fill critical care nursing positions amid a predicted surge of COVID-19 cases, offering signing bonuses, extra wages and expenses to those who sign up to help out. In a memo sent to nurses in the province, the Health Department said its critical care nurse […] 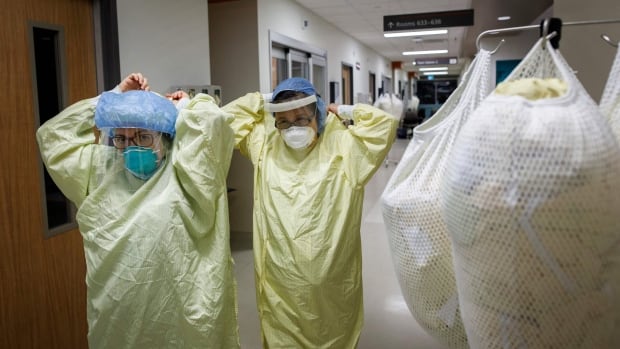