The Nets and Ben Simmons had been hoping the swingman would be able to avoid going under the knife to conquer his back pain, but the team announced Wednesday he will have surgery.

Multiple specialists told The Post that the All-Star should be ready for training camp, and is overwhelmingly likely to make a full recovery.

Simmons is slated to have a microdiscectomy on Thursday. The procedure is designed to alleviate pain caused by the herniated L-4 disk in his back. It’s at least the fourth back injury for Simmons in the last two years. The Nets are hoping this procedure will solve the issue in time to have him back on the court well before the start of next season.

The Nets and Simmons had exhausted every non-surgical avenue, and after consulting with multiple specialists, it was decided surgery was the best long-term solution.

The Post spoke with several orthopedists who were bullish on a full recovery.

“If all goes well, he should be back in three months,” Dr. Rahul Shah, a New Jersey-based board certified orthopedic spine and neck surgeon, told The Post. The former team doctor for the Orlando Magic, Dr. Shah predicted months ago that Simmons would require an offseason procedure, and that’s what came to pass.

Keep up with the most important sports news

Sign up for Starting Lineup for the biggest stories.

Dr. Neel Anand, professor of orthopaedic surgery and director of spine trauma at Cedars-Sinai Spine Center in Los Angeles, concurred on the timeline.

“[Athletes] tend to do very well as long as the surgery is good, if it goes well, I think he has a great chance in three months to get back,” Dr. Anand said. “So I think next season he can be fine. He’s got perfect timing.

“I think given three months, he can rehab. Usually by two-to-six weeks you’re starting to rehab, and by six weeks to three months you’re really intensifying into full-time rehab, and you’re there. Three months most of them get back.”

Granted, Simmons will miss an entire offseason’s worth of working out and playing pickup, and could be behind the curve when camp starts. And the 25-year-old — whom the Nets acquired when they traded former MVP James Harden to the 76ers — is already rusty, after not having played a competitive game since June 20, when Philadelphia was eliminated in last season’s Eastern Conference semis.

Simmons didn’t play a second of the 2021-22 season, first holding out with the 76ers while citing mental health issues, then hurting his back while ramping up to play for the Nets. Days after The Post reported that he would require an epidural cortisone shot, and likely offseason surgery, he had the injection in mid-March.

Now, he’ll have the surgery, though Nets coach Steve Nash said multiple times since March that the team didn’t expect Simmons to require an operation. There even were reports Simmons would play in Game 4 of the Nets’ first-round series against the Boston Celtics, and widespread accusations from fans and media members alike that he was faking his injury.

The Nets are heavily invested in getting Simmons right, both mentally and physically.

Not only was he the centerpiece of the Harden megadeal, but also he just finished the second season of a five-year, $177 million contract.

Dr. Anand said microdiscectomy has a 99 percent success rate, with just a three percent likelihood of the same disk herniating again years down the road.

“I would say the microdiscectomy is probably one of the best procedures we do,” Dr. Anand said. “In two to four hours, he can be home. I’d say in a week to 10 days, pretty much normal; 10 days to six weeks, rehabbing; six weeks to three months, pretty much getting back to the field. Three months, I’d say most athletes will be back on the field, back doing everything.”

Fri May 13 , 2022
Picture posed by models (Prostock-studio/Adobe Stock) Story updated Proposals to overhaul the Mental Health Act 1983 will be considered by Parliament over the next year, the government announced today in the Queen’s Speech. It will produce a draft bill designed to reduce the number of detentions, tackle longstanding racial disparities […] 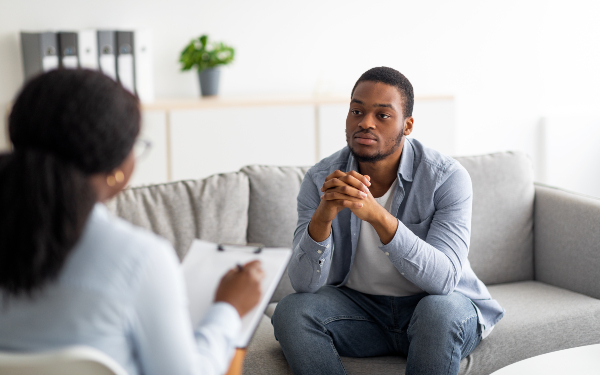