‘EXHAUSTED AND WE’RE BURNING OUT’: Some 5,000 nurses at Stanford Health Care and Lucile Packard Children’s Hospital — among the top-ranked hospitals in the country — plan to go on strike a week from today amid the collapse of contract negotiations.

More than 9 in 10 eligible nurses voted to authorize a strike April 8, after three sessions with a federal mediator proved unsuccessful. The union representing them, Committee for Recognition of Nursing Achievement, says it has participated in more than 30 bargaining sessions over 13 weeks with hospital administrators.

Their contract has been expired since March 31. The union is seeking “solutions Nurses have identified as key to addressing chronic staffing problems, supporting mental health and wellness, and ensuring competitive wages and benefits,” according to a press release.

“Nurses are exhausted, and we’re burning out,” Charon Brown, a nurse in the cardiovascular ICU at Stanford Health Care, said. “Striking is a last resort, but the hospitals are refusing to take our well-being seriously.”

The issues at hand are reflective of those playing out in hospitals nationwide. More than 90 percent of nurses in a 2021 American Association of Critical-Care Nurses survey said that the pandemic had “depleted nurses at their hospitals, and, as a result, their careers will be shorter than they intended.”

Nearly 70 percent said they were considering leaving the profession because of their coronavirus-related experiences; another 76 percent said that unvaccinated patients “threatened nurses’ physical and mental well-being.”

Some 45 percent of unionized nurses at the Stanford hospitals say they are considering leaving, a union survey found. They “say high turnover rates, understaffing, and inadequate proposed wage increases and benefits have contributed to high burnout rates,” The Guardian’s Michael Sainato reports.

“In January 2022, a nurse on a contract at Stanford hospital walked out of their shift and killed themself, highlighting the need for better mental health and wellness support services and for improvements to the poor working conditions that nurses have faced through the Covid-19 pandemic,” Sainato writes.

Covering their bases: The hospitals have “secured the services of licensed, qualified, experienced replacement nurses to ensure patient care remains uninterrupted” in the event of a strike, Stanford Health Care Chief Nurse Executive and Vice President of Patient Care Services Dale E. Beatty and Senior Vice President of Patient Care and Chief Nursing Officer for Stanford Children’s Health Jesus Cepero said in a statement to Morning Shift. “Both hospitals will remain open and our community can continue to count on the safe, high-quality care it has come to expect.”

But “while we respect our nurses’ rights to engage in this work action, we are disappointed that the union has chosen to strike,” they said. “Our goal has always been to reach a mutually acceptable agreement through good faith negotiations and have to date made meaningful progress at the bargaining table.”

Not messing around: “We have notified the union that nurses who choose to strike will not be paid for any shifts they miss,” the hospitals said in a separate statement to local ABC affiliate KGO’s Tim Johns. “In addition, employer-paid health benefits will cease on May 1 for nurses who go out on strike and remain out through the end of the month in which the strike begins.”

GOOD MORNING. It’s Monday, April 18. Welcome back to Morning Shift, your go-to tipsheet on employment and immigration news, where we couldn’t agree more with this return-to-office assessment. Send feedback, tips and exclusives to [email protected] and [email protected]. Follow us on Twitter at @eleanor_mueller and @nickniedz.

Want to receive this newsletter every weekday? Subscribe to POLITICO Pro. You’ll also receive daily policy news and other intelligence you need to act on the day’s biggest stories.

PANDEMIC RELIEF CUTS BOTH WAYS: Pandemic perks like unemployment insurance are delivering surprisingly robust tax returns for some — and sticking others with unforeseen bills, our Brian Faler reports.

“The IRS normally considers jobless benefits to be income and therefore subject to tax. Back in 2020, when Democrats first expanded unemployment checks, they also waived taxes on the first $10,200 in assistance. Lawmakers later extended those benefits into 2021, which were claimed by an estimated 24 million Americans, but did not re-up the provisions canceling the accompanying taxes.”

“People are surprised it’s not the same rules as 2020,” said Andrew Stettner, an expert on unemployment benefits at The Century Foundation.

“Some may have had taxes withheld on their benefits, in anticipation of a tax bill, but many others did not. And while most people probably have since gone back to work, Stettner worries about those still out of work who are now getting hit by the IRS.”

CONGRESSMAN REPORTEDLY PROFITING FROM SPECIAL UNION CONTRACT: Rep. Kai Kahele (D-Hawaii) is benefiting from a union contract with Hawaiian Airlines empowering him to earn income as a pilot while also serving in Congress, the Honolulu Civil Beat’s Nick Grube reports
.
“Contract documents and other internal records obtained by Civil Beat show Kahele has been on a specialized leave of absence that was designed for Hawaiian Airlines pilots who have been appointed or elected to state or federal office or who hold a position within a government agency that is ‘directly connected with aviation.’ Kahele, however, seems to be the only person within the company who qualifies for the benefit.”

“Hawaiian Airlines is not going to kill the goose that’s going to lay the golden egg for them,” one of the employees said. “The Air Line Pilots Association is not going to do that either.”

“House ethics rules limit the amount of outside income a member of Congress can earn. There’s also a potential conflict of interest when Kahele acts on legislation that ultimately benefits his employer.”

: New research shows that several million workers who dropped out of the U.S. workforce during the pandemic intend to stay out indefinitely because of physical impediments or illness concerns, The Wall Street Journal’s Josh Mitchell reports.

Who are they? “About three million workforce dropouts say they don’t plan to return to pre-Covid activities — whether that includes going to work, shopping in person or dining out — even after the pandemic ends, according to a monthly survey conducted over the past year by a team of researchers. The workforce dropouts tend to be women, lack a college degree and have worked in low-paying fields.”

Big picture: “Should the researchers’ predictions turn out to be true — that the labor force will be depressed for potentially years after the pandemic recedes — the implications for the world’s largest economy and the Federal Reserve are substantial. A sharp drop in the labor force at the pandemic’s start led to shortages of workers and products that have frustrated households, restrained economic growth and helped push inflation to a 40-year high.”

RELATED: “Odds of Getting Laid Off Are at Historic Lows in Tightest Labor Market in 50 Years,” from The Wall Street Journal

IS LOW-WAGE JOB SWITCHING, AND ITS BENEFITS, ON THE DECLINE? The wave of low-wage workers switching jobs at record-high rates shows signs of easing now — and economists say it’s possible some may not end up much better off than before, The Wall Street Journal’s Gabriel T. Rubin reports.

“Quitting may have peaked. Quit rates in leisure and hospitality have dropped to 5.6 percent in February 2022 from 5.9 percent in November 2021, which suggests demand for workers has eased. In concert with that, wage growth is moderating.”

At the same time, “rank-and-file leisure and hospitality workers are making 14.9 percent more than a year ago, but wage gains in that sector have dropped or held steady for three straight months.”

Etsy’s 5.3 million active sellers “aren’t employees of the company, but they’re hoping that by joining together, they can better advocate for changes at the online marketplace. A number of Etsy sellers have joined a Discord server where they intend to map out organizing plans.”

One worker said “she was inspired to organize Etsy sellers after witnessing the recent union victories among Starbucks baristas and at an Amazon warehouse.”

By the numbers: “The company was a big winner during the Covid pandemic, as consumers cut trips to the store and flocked to online retailers. Etsy sellers generated gross merchandise sales of $12.2 billion in 2021, compared with $5 billion in 2019.”

IS APPLE ABOUT TO GET ITS FIRST UNION? Workers at Apple’s flagship Grand Central Terminal store in Manhattan have started collecting signatures to form a union, The Washington Post’s Reed Albergotti reports.

“If the organizers of Fruit Stand Workers United are successful in gathering enough votes to form a union, the Grand Central location would become the first of Apple’s retail stores to do so. That would add the Cupertino, Calif., company to a growing list of corporate behemoths, including Amazon, Starbucks and Activision-Blizzard, facing a wave of unionization efforts in a labor landscape that has fundamentally shifted in the wake of the global pandemic. At least three other Apple retail locations are in the process of forming a union, according to employees who spoke on the condition of anonymity to keep their jobs.”

“The organizers, who have dubbed themselves ‘Fruit Stand Workers United,’ say they voted Feb. 21 to affiliate with Workers United, a national labor union that has supported the successful unionization efforts of Starbucks employees around the country, according to the site. People involved in the organizing effort told The Washington Post that they have endured months of efforts by Apple to convince employees that unionizing is a bad idea, accusing the company of ‘union busting’ tactics. Now, they are handing out signature cards to would-be union members.”

“If we sped up the immigration of people based particularly on work skills and work demand, if we increased the number of people who were allowed to immigrate into the United States based on the skills they bring to the marketplace, we could fix this huge excess demand for labor problem pretty quickly,” Kelly said.

As Hoff notes, “immigration has drastically slowed in the past several years, owing to the pandemic and more restrictive policies during former President Donald Trump’s administration. According to an analysis of Census Bureau data from Insider’s Jason Lalljee and Andy Kiersz, if 2011 to 2016 immigration trends had continued, there would have been around 2 million more immigrants who entered the country between 2017 and 2020.”

RELATED: “Oregon immigration is down sharply, fueling labor shortage,” from The Oregonian

— “How Black washerwomen in the South became pioneers of American labor,” from The Washington Post

— “College Athletes Who Cashed In Have a Painful New Homework Assignment: Their Taxes,” from The Wall Street Journal

— “How Panera Bread Navigated Covid, the Labor Market, Inflation and More,” from The New York Times

— Opinion: “Women ultimately may pay the price for finally earning as much as men,” from the New York Post

— “Wait, What if People Did Just Stay Home in Their Pajamas?” from The New York Times

— “What If the Office Isn’t the Problem?” from New York Magazine

THAT’S ALL FOR MORNING SHIFT!

Fri Apr 29 , 2022
New York Post may be compensated and/or receive an affiliate commission if you buy through our links. Be like Fergie, and work on your fitness. But to reap the best benefits, you must have some top-notch exercise equipment that matches your fitness needs, budget and capabilites. For some, that may […] 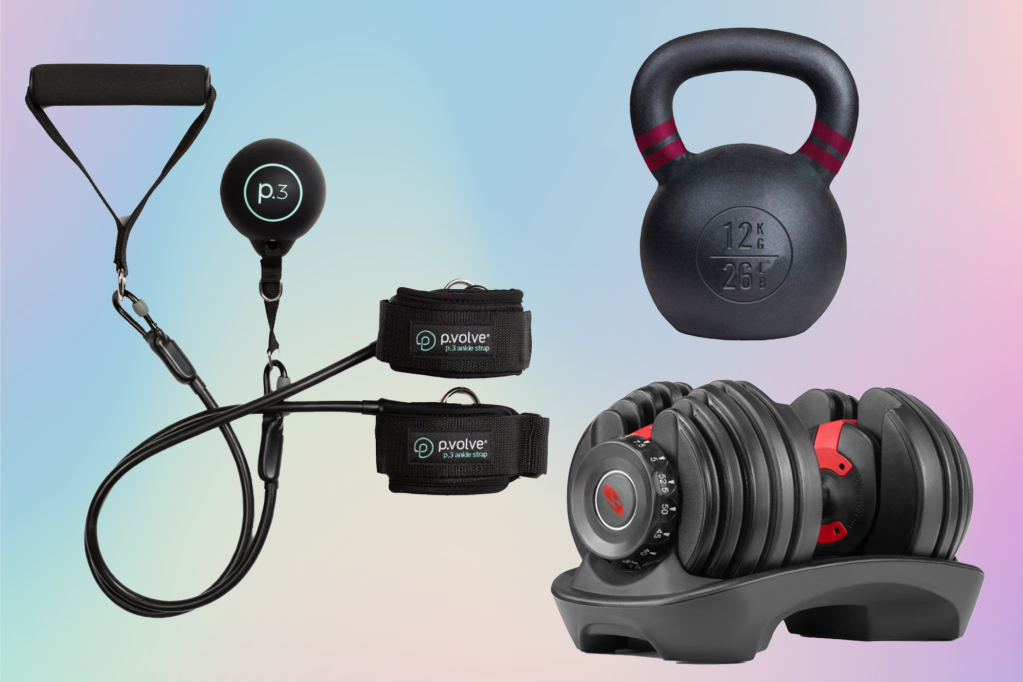