Sitting by the fireplace in my lounge, watching as my 5-month-old baby happily gazed up at his jungle gym, I burst into tears. My sobs, coupled with the overwhelming sense that I was losing control – and already failing in my new role as a mum – had started to become routine. But it still took me a full fortnight of crying every day before I realised something was seriously wrong… because I knew I loved my son, so it couldn’t be postnatal depression. Right?

Initially I told myself I was ‘just being emotional’ and didn’t think about confiding in anyone, but one morning, I woke up and found I was completely exhausted. In every possible way. Feeling drained at the thought of facing another day of tears, I knew something had to change, so I tentatively completed an online e-consult form to request an appointment with my GP, half thinking I was wasting their (and my) time, half thinking it was exactly what I needed.

Following an appointment later that day, I was officially diagnosed with postnatal depression (PND). Weeks of misery finally had a name, and it’s something that more than 1 in 10 new mums will go through, yet PND is still so often shrouded in mystery and misrepresented in the media.

It can begin anytime within 12 months after giving birth, with partners and fathers also affected, and differs to ‘the baby blues’ which affects most new mums and is a short period (up to two weeks after childbirth) of feeling low, emotional, anxious and irritable, thought to be a result of hormonal changes.

Symptoms that persist or begin after this time are classed a sign of PND, and it’s not always about struggling to bond with your baby, despite that being the most common way it’s portrayed. When TV shows Girls, Nashville and Jane the Virgin ran PND storylines, they all involved new mums growing distant from their babies, but my experience didn’t reflect this at all. I did feel the oft-described, all-consuming love and connection with my child – which is why I didn’t immediately connect the dots and think that what I was experiencing was PND.

What are the symptoms of postnatal depression?

“Adjusting to parenthood can be tough and overwhelming as you adjust to a new normal,” explains Emma-Jane Marshall, an Integrative Counsellor and Psychotherapist. “For some parents though, a persistent low mood that lasts more than a few weeks could mean that PND has set in.”

“As a relaxed and easy-going person, I’d pictured motherhood as an extension of how I was already living my life… but in reality, it was a whole new one”

“Some of the signs include feeling extremely anxious, having unwanted or upsetting thoughts, and always being hyper-critical. Often a depressed mum will have some form of sleeping difficulty, or excessive tiredness too,” Marshall notes. “Of course every parent suffers from exhaustion, but if tiredness levels seem excessive it could be a warning sign that things aren’t quite right.”

She advises new mums to speak to their GP or health visitor ASAP, detailing all of the symptoms they’re experiencing, and adds that it can be helpful to have someone with you during the appointment. Crucially, she also stresses that PND is nothing to be ashamed of.

As a relaxed and easy-going person, I’d pictured motherhood as an extension of how I was already living my life. I envisaged strapping the baby into a sling and heading out to brunch; walking around the park with the pushchair, coffee in hand; regular date-nights with my husband. So the reality of juggling brunch and a baby, and the prospect of a walk or night out when I was overcome with tiredness took me by surprise. It wasn’t an extension of my life, it was a whole new one, and so I found motherhood to be lonely.

I doubted every decision I made; I restricted myself to just an hour of tv a day, telling myself that every minute it was on was a minute I wasn’t giving any attention to my baby. I worried that I wasn’t washing his bottles properly and he’d get ill. My husband was out of the house for 12 hours a day and my family live 160 miles away so despite my mum’s frequent calls, it became a really stressful time.

It’s a familiar-sounding story for Kirsty, who had her daughter in 2019. She was told it was likely that she’d suffer from PND because of her history of depression and gestational diabetes. Her feelings of anxiety, isolation and low mood arose just a few weeks after the birth (although looking back Kirsty admits she was in a state of anxiety throughout her pregnancy, which, along with perinatal anxiety and perinatal OCD, is another common mental health condition affecting mothers-to-be).

“I thought breastfeeding would be easy and it wasn’t, and that fuelled these feelings of inadequacy and left me questioning ‘Why aren’t I feeling something else? Why aren’t I glowing and loving every second of this?’. I was just so worried that there was something wrong with me because I didn’t have that explosion of joy when I met my daughter, and that’s when alarm bells started ringing for me,” she admits. “But I was so ashamed I just didn’t want to say anything. I felt it was some deep, dark secret and I was an awful human.”

It wasn’t until a health visitor came for a routine check-up that Kirsty vocalised her feelings. She was urged to speak to her GP, who referred her to Mind, and group therapy followed. Once therapy ended, she also found anti-depressants helpful but now, looking towards the future, Kirsty is concerned about the effects another pregnancy could have on her mental health.

“I’m worried that if I were to have another child, PND would come back with a vengeance. It’s still hanging around, I’m still taking anti-depressants,” she explains. “I want to decrease the dose, but there’s parts of my life that are really stressful and medication helps me to manage that better. It’s hard to see where the PND ends and the regular depression begins.”

The risk of developing PND again with subsequent babies varies from about 30% to 70% depending on the severity of the symptoms previously experienced. In cases like this, Marshall again suggests speaking with the GP, having extra psychological support during pregnancy, practising self-care and putting a support network in place.

“You don’t have to feel this way, I wish I wasn’t so stubborn and thought I could deal with it all by myself for so long,” adds Kirsty. “If you’ve got people around you who want to help, let them.”

Can men get postnatal depression?

A lesser spoken about and more stigmatised area of PND is fathers suffering from it. “You don’t want to be seen as being weak,” says Charlie*, who began experiencing symptoms of PND when his second child was born. “The male stereotype is that you’re the one that has to keep the family going.”

He describes how life filtered from colour to gray, as he became “more numb” and started to “detach from [the baby]” and everything. “I didn’t want to be at home. I didn’t think at the time that it was anything to do with my child,” Charlie says. “I didn’t know too much about postnatal depression, I didn’t think it was anything to do with men, and felt pretty ashamed about everything.” Despite new dads not experiencing the same hormonal changes as their partners, if they experience any symptoms of depression in the 12 months following their baby’s birth then it can also be termed PND.

After feeling this way for several months, Charlie texted his brother, who suggested he meet with a therapist. Whilst he remains undiagnosed with PND, Charlie says that when he read into the condition with his wife, it was “exactly what I’d been feeling, it was like ticking off [a list of my] symptoms”.

Communication is how Charlie’s come through PND and is the advice he gives others. “You need to try and make time for yourself. Do the things that you like. But having someone to talk to has been a real game changer – life saver – for me.

“It’s hard not to feel shame for the way I was feeling at that time, but it’s important to say that my relationship with my kids is amazing. I can’t live without them.”

After my GP appointment I was prescribed group counselling sessions which lasted for 10 weeks and focused on cognitive behavioural therapies (CBT). Despite my initial apprehensions, I too found therapy incredibly helpful.

“A key part of CBT is identifying the negative thinking patterns that you may feel trapped in, helping you to break free from these and to feel better,” explains Marshall. “Whatever type of therapy you pick it should give you a safe space, without judgment, to help you explore your thoughts and feelings.”

I didn’t tell many people that I’d been diagnosed with PND, but the first friend I confided in – straight after my GP appointment – was so supportive. She messaged me every day for 6 months afterwards, just checking in. Her messages, like ‘Good morning Mummy, remember you’re doing a great job!’, didn’t need a reply and for me, that was key – when you already feel like life’s too much, even a couple of unread WhatApp messages can be triggering.

Marshall also shares advice for supporting someone you think might have PND. “Offer to take on household tasks such as cooking, shopping or laundry, which can seem overwhelming when you are depressed, and encourage them to keep in contact with family and trusted friends. When they feel up to it, joining local mums at cafes, baby groups, support groups (including online) can be helpful too.” Reminding your loved one that they will get better and that having PND isn’t there fault is also a good way of showing you’ve got their back.

When I fell pregnant with my second child last year, I worried my PND would resurface, but because of my history I was given an extra level of support from my midwife. I also took it upon myself to create a care plan, including asking my mum to come and stay with us when the baby was born, pre-empting any feelings of loneliness or being unable to cope.

Now, as a mother of two, when I sit by the fireplace – watching both children playing – I do still have moments where I feel sadness for the mum I was in those first few months, and I mourn the time that I lost to my depression. But, knowing that I found the strength to overcome it gives me the confidence to know I can take on anything else that comes my way – and support my friends in their motherhood journeys too.

*Name has been changed

This content is created and maintained by a third party, and imported onto this page to help users provide their email addresses. You may be able to find more information about this and similar content at piano.io

How I train for my body type: Exercise and diet tips that helped an ecto-mesomorph put on muscle mass

Sat Mar 5 , 2022
As a comparatively skinny and tall guy, I always admired people who could pack on muscle easy. I tried working out occasionally in the past and made some minuscule gains but I haven’t realised my full potential until I learned more about body types and how to train for them […] 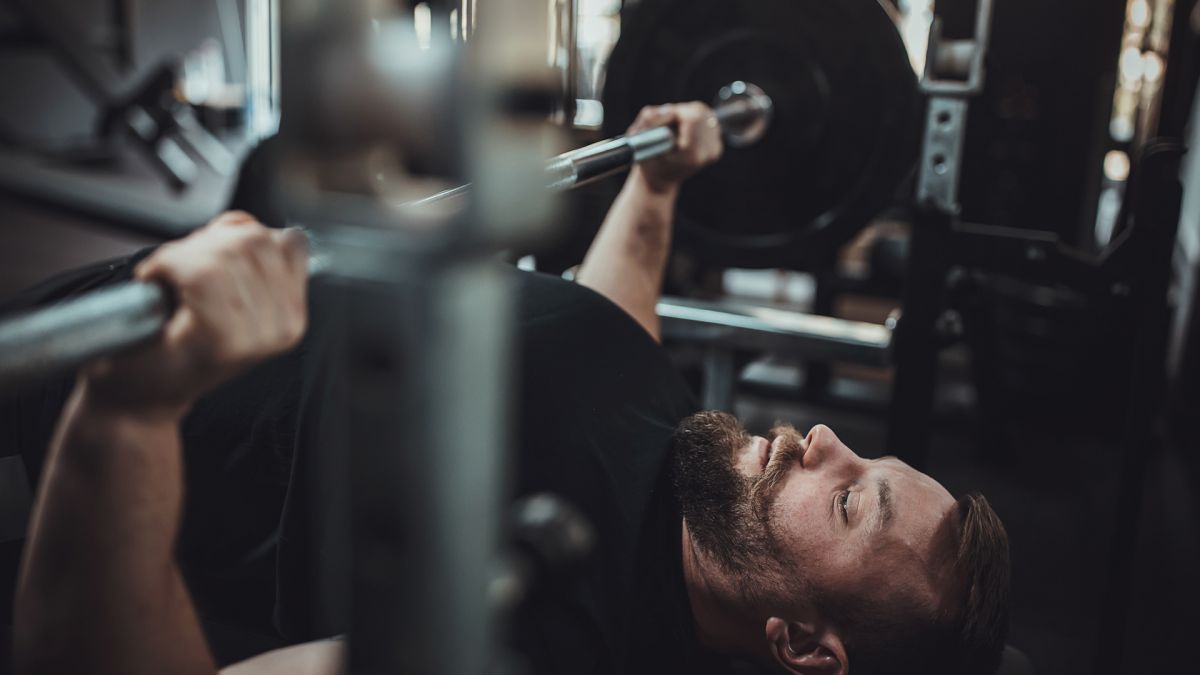