New research highlights the important role of nutrition for the treatment of depression and should inform advice given by clinicians to young men.

Young males with a poor diet saw a significant improvement in their symptoms of depression when they switched to a healthy Mediterranean diet. Image credit: Barbara Jackson.

“Young adulthood offers an opportunity for early dietary interventions, with research suggesting that a Mediterranean diet could be beneficial in treating depression.”

To assess the effect of a Mediterranean diet intervention in the treatment of depression in young males (18-25 years), the researchers conducted a 12-week, parallel-group, open-label, randomized control trial.

A total of 72 participants completed the study. Befriending therapy was chosen for the control group. Assessments were taken at baseline, week 6 and week 12.

Diet adherence was measured with the Mediterranean Adherence Score (MEDAS). The primary outcome measure was the Beck Depression Inventory Scale (BDI-II) and secondary outcome was Quality of Life (QoL).

After 12 weeks, the MEDAS scores were significantly higher in the Mediterranean diet group compared to the befriending group.

The mean changes in BDI-II and QoL scores were also significantly higher in the diet group compared to the befriending group at week 12.

“We were surprised by how willing the young men were to take on a new diet,” Bayes noted.

“Those assigned to the Mediterranean diet were able to significantly change their original diets, under the guidance of a nutritionist, over a short time frame.”

“It suggests that medical doctors and psychologists should consider referring depressed young men to a nutritionist or dietitian as an important component of treating clinical depression.”

The diet used in the study was rich in colorful vegetables, legumes and whole grains, oily fish, olive oil and raw, unsalted nuts.

“The primary focus was on increasing diet quality with fresh whole foods while reducing the intake of ‘fast’ foods, sugar and processed red meat,” Bayes said.

“There are lots of reasons why scientifically we think food affects mood.”

“For example, around 90% of serotonin, a chemical that helps us feel happy, is made in our gut by our gut microbes. There is emerging evidence that these microbes can communicate to the brain via the vagus nerve, in what is called the gut-brain axis.”

“To have beneficial microbes, we need to feed them fiber, which is found in legumes, fruits and vegetables.”

The findings were published in April 2022 in The American Journal of Clinical Nutrition.

Jessica Bayes et al. The effect of a Mediterranean diet on the symptoms of depression in young males (the “AMMEND” study): A Randomized Control Trial. The American Journal of Clinical Nutrition, published online April 20, 2022; doi: 10.1093/ajcn/nqac106

Sat May 14 , 2022
Yuki Fujita, MPH, channeled inspiration from the long line of health care professionals in her family while studying to be a nurse practitioner at UMass Chan Medical School. Her grandfather is a seventh-generation physician, her uncle is a physician and her cousin is a nurse. Fujita will graduate on June […] 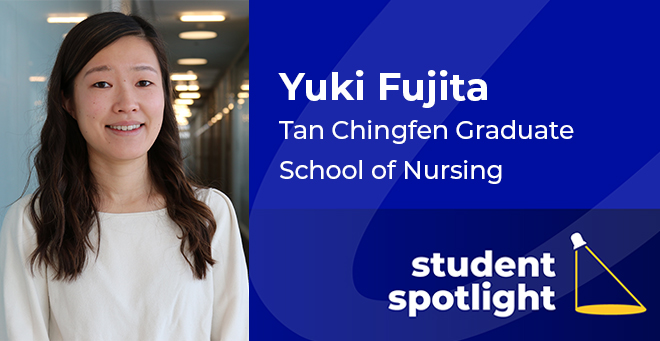